In an ideal world, we'd have one person moderating a user research session and at least one other person taking notes or logging data. In practice it often just doesn't work out that way. The more people I talk to who are doing user research, the more often I hear from experienced people that they're doing it all: designing the study, recruiting participants, running sessions, taking notes, analyzing the data, and reporting.

I've learned a lot from the people I've worked with on studies. Two of these lessons are key:

- There are ways to make it easier, more efficient, and less stressful.

Today, I'm going to talk about a couple of the techniques I've learned over the years (yes, I'll give credit to those I, um, borrowed from so you can go to the sources) for dealing with stuck participants, sticking to the data you want to report on, and making it easy to see patterns.

Say you're testing a process that has several steps and you want to see the whole thing, end-to-end. This is not realistic. In real life, if someone gets stuck in a process, they're going to quit and go elsewhere. But you have a test to do. So you have to give hints. Why not turn that into usable data? Track not only where in the user interface people get stuck, but also how much help they need to get unstuck.

This is also an excellent technique for scavenger hunt tasks – you can learn a lot about where the trigger words are not working or where there are too many distractions from the happy path or people are simply going to need more help from the UI.

Here's what I learned from Tec-Ed about what to do when a participant is stuck but you need them to finish:

- If participants are unable to move forward, give a hint about where to look: "I noticed that you seem to be focused mostly in this area (pointing). What if you look elsewhere?"

- If participants are still stuck and want to give up or say they would call someone, let them call a "help desk" or, depending on the study, give a stronger hint without being specific.

- Finally, you may have to get specific.

The idea is to note where in the UI you're giving the hints and how many for any particular hindrance. This gives you weighted evidence for any given participant and then some great input to design decisions as you look at the data across participants.

You may say this is cheating. But don't you feel like you have a pretty good idea of what's going to happen when a participant uses a design? This technique is about anticipating what's going to happen without projecting to participants what the possibilities are. Make a list of all the possible wrong turns you can imagine. Or at least the ones you care about fixing.

Being able to do this comes from awareness and the researcher's experience with lots of user interfaces. This is not easy to do if you've only done one or two studies. But as you get more observations under your belt, looking ahead gets easier. That is, most of us are paying attention to the happy path as the optimum success in a task, but then have to take lots of notes about any deviation from that path. If you look at what the success and error conditions are as you design a study, you can create list to check off to make data gathering quicker and less taxing as you're doing both that and moderating.

Here's an example from a study I did with Ginny Redish researching the language of instructions on ballots. This is on a touch screen, so "touch" is the interaction with the screen, not with an actual candidate: 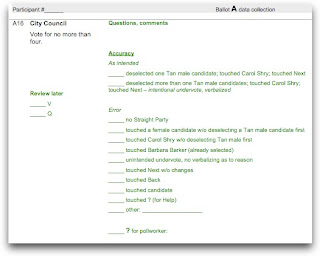 There are a lot of things wrong with this particular example: having the same word at the beginning of many of the possible selections does not make the list easy to skim and scan; there are too many items in the list (we ended up not using all of those error conditions as data points). As we designed the test, we were interested in what voters did. But as we analyzed the data and reported, we realized that what didn't matter for this test as much as whether they got it right the first time or made mistakes and recovered or made mistakes and never recovered. That would have been a different pick list.

But all was not lost. We still got what we wanted out of the pick lists. This is what they ended up looking like as note-taking devices: 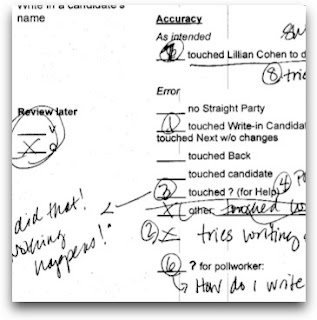 Usually in a formative or exploratory study, you can get your participants to tell you what you need to know. But sometimes you have to decide what happened from other evidence: how the participant behaved, what they did to solve a problem or move forward, where they pointed to.

As a researcher, as a moderator, you're making decisions all the time. Is this data? Is it not? Am I going to want to remember this later, or is it not needed?

After we realized that we were just going to make a judgment anyway, Christine Perfetti and I came up with a shortcut for making those kinds of decisions. Really, what we're doing is assisting judgments that experienced researchers have probably automatized. That is, after dozens or hundreds of observations, you've stored away a large library of memories of participant behaviors that act as evidence of particular types of problems.

To make these on-the-fly judgments, Christine and I borrowed a bunch of techniques from Jared Spool at UIE and used variations of them for a study we worked on together. As the moderator of the day asked, "What do you expect to happen when you click on that?" and followed up with, "How close is this to what you expected?" the note taker for the day recorded something like this:

Another way to use this trick is to ask, "The task is [X]. How close do you feel you are now to getting to where you want to be? Warmer? Cooler?"

I also think that most of us collect too much data. Well, okay, I often do. Then I wonder what to do with it. I've found that when I really focus on the research questions, I can boil the data collecting down significantly. So here's a minimalist note-taking device:  I created a one-sheet data collector that covered three tasks and helped me document a pass/fail decision for voting system documentation. You can quibble about some of the labeling in the example below, but I was happy to have one piece of paper that collected what happened along with how I know that, and what that combination of things happening means.

It attempts to encapsulate the observation-inference-theory process all in one place. 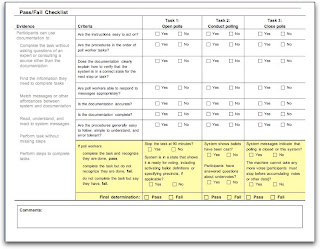 Again, if you haven't done much user research or usability testing, you may not be happy with this approach. And, let's not forget how valuable qualitative data like quotes is. But you more experienced people out there may find that codifying the judgments you're making this way makes it much quicker to note what happened and what it might mean, expediting analysis.

Shortcuts are not for sissies

Most user research is not run in an ideal world. Note taking in user research is one of the most difficult skills to learn. Luckily, I have had great people to work with who shared their secrets for making that part of the research less stressful and more efficient.

Graduated prompting is a way to quantify the hints you give participants when you need them to complete tasks in a process or continue on a path in a scavenger hunt.

Judged ratings are based on observations and evidence that fall into defined success and error criteria.

Got several dozen hours under your research belt? Focus the data collecting. Try these techniques for dealing with stuck participants, sticking to the data you want to report on, and making it easy to see patterns.

Come to UI 14 in Boston November 1-3 and get a discount on me. Type in promotional code CHISNELL when you register and you'll get $50 off each day. If you sign up for all three days, you'll also get a set of Bose headphones. Sweeeet.


Do it! You know you want to. Mastering the Art of User Research.

If you want customers to love your design,
fall in love with your customers.

Order Handbook of Usability Testing Second Edition. (Do it - you know you want to!)
__

Let's talk about workshops for your team, coaching, or developing a user experience strategy.
__